Our trip to Ireland - the circle is almost closed

This week I travelled to Mt. St. Patrick where my Canadian roots began after John Maloney's immigration from Ireland. It is west of Renfrew Ontario.

A bit of history on the homestead from the census records I have.

From the 1851/1852 Canadian census, the family was living in a one storey shanty house and born in "Earland" (I think that was supposed to be Ireland but it seems the census takers spelled phonetically, as you will see from the spellings of our name). My gg-grandfather's name was spelled "Mulloney" and his wife's name was Debby "Murarty" (her name was Moriarty).

In the 1861 census, the family was now living in a one storey log house.

In the 1871and 1881 census my gg-grandfather's name was spelled "Moloney". In 1871 Daniel Moriarty appears on the scene, must be Debora's father from Ireland.

Then in the 1891 census, we see "Maloney" spelled as we spell it now. Son Michael Maloney and wife Johanna Kiely and their two children, now lived in the house along with Debora and John and two of their children. It notes that my gg-grandmother could not read or write.

The 1901 census states that both John and Debora spoke "Irish" (not sure why Irish is in quotes). They both still live in the home along with Michael and Johanna and their four children.

Not sure how everyone fit into a one storey log cabin. For instance in the 1861 census I count 12 people living in the house.

The house that stands on the property now was built in 1922, the same year my father was born.

John and Debora had 12 children, Patrick died at one, and Mary before her first birthday, maybe at birth.

My great great grandfather is buried in the parish cemetery along with other Maloneys, including my own brother John Maloney. 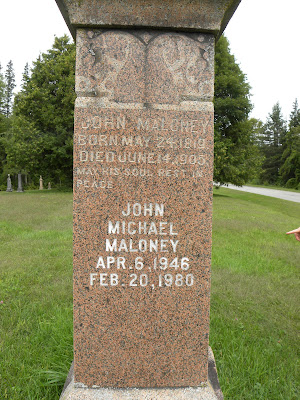 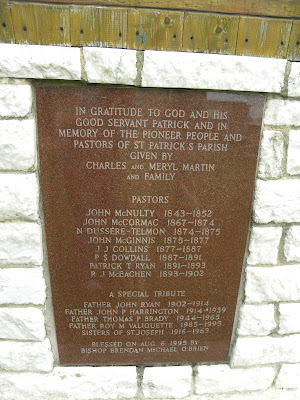 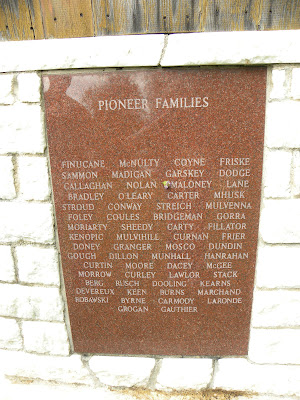 I went with my two sisters, one brother, and three spouses. We drove the four miles from Mt. St. Patrick where the cemetery is, up Maloney Mountain to the farm that housed five generations of Maloneys. 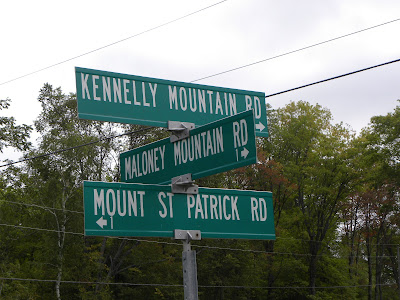 Jimmy, moi, Paula, Maureen at cemetery at the base of the mountain, along with a few dead Maloneys 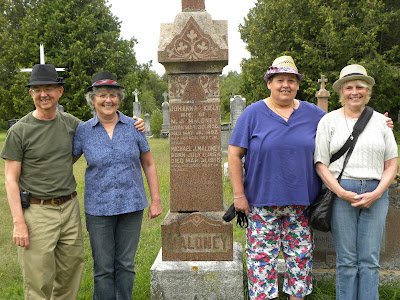 The house and land is still owned by my two cousins, and is still used as a hunting camp. In the picture below, you can see some of the barns. Notice the barn to the right of the house. That is the cook house. This was used in the summer. They would literally move the wood stove in the kitchen out to the cookhouse in the summer, since it would heat the house up too much. Then they would move it back into the house for the winter. The stove was the only heat source in the house. Below the picture is a hole in the kitchen above the stove. This is how the heat made its way up into the second floor. There may have been an actual pipe up to the second floor, but as a child going up to the farm, I don't remember ever seeing one. There are no heaters on the second floor. And remember this is Canada where winters can be as cold as -35 Celsius and probably colder on the mountain. My father used to tell me that when they woke up in the morning during the winter, the water in the water basin in the room would be frozen.

There was no running water when my father was growing up either. They used an outhouse as well.

The house on our approach down the laneway 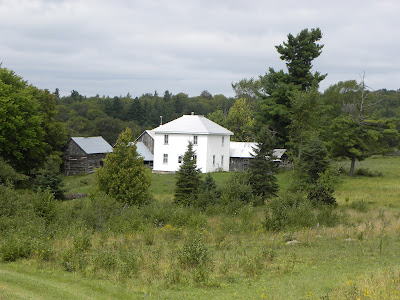 Hole above the stove in the kitchen, I am standing upstairs. 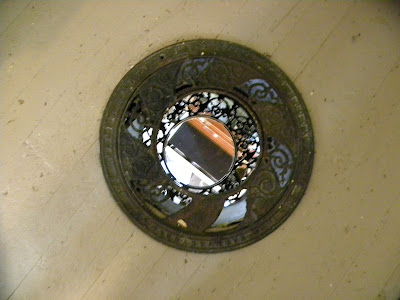 Canadian fences are mostly made of cedar 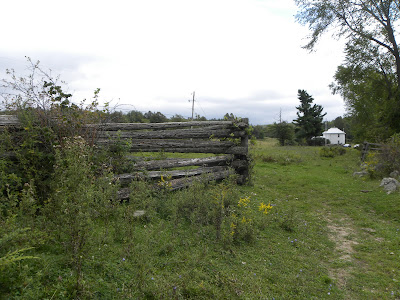 From behind the house, we are back quite a piece 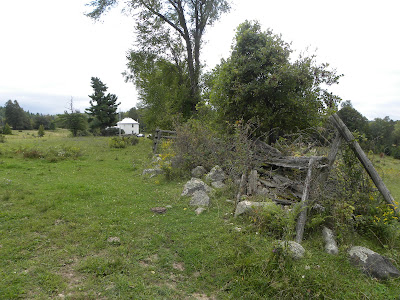 One of the barns, probably one of the original buildings 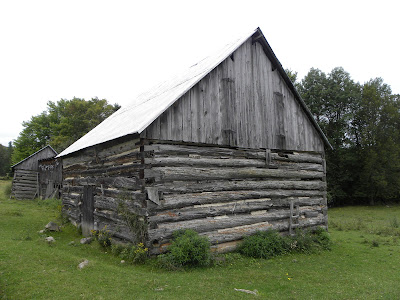 Cows in the pasture just like Ireland. House to the left, another barn to the right. Pat McDonald grazes his cows here. 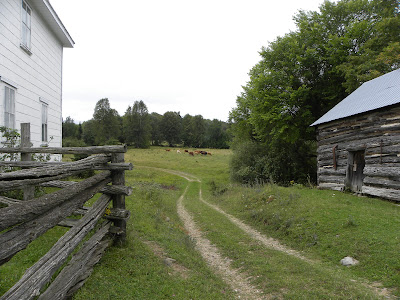 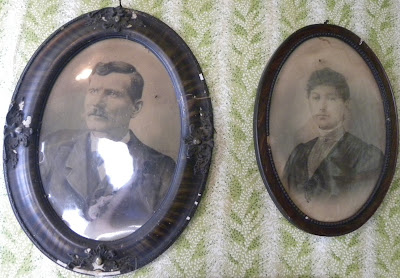 My grandfather, John Maloney (I think) 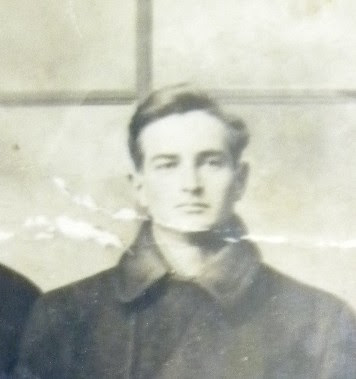 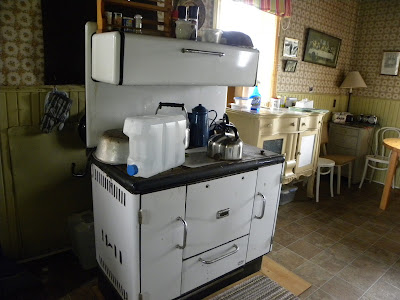 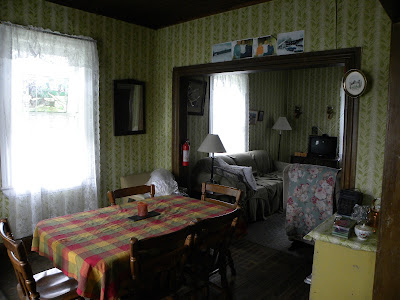 And lo and behold I discovered STONE FENCES back on the property. OH. MY. GOODNESS. I have never seen stone fences in Canada, like those we saw in Ireland. But here they are. They appear to have cedar placed on top of the fences. I imagine that these fences were built when my ancestors first built the homestead, and then started using cedar when they discovered how plentiful it was. 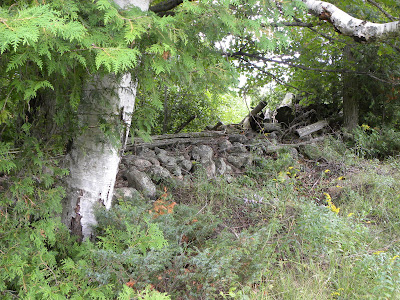 Me sitting on one of these combo stone/cedar fences. 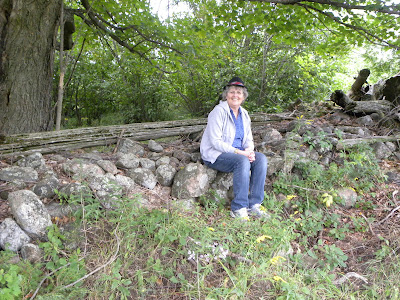 We need some colour 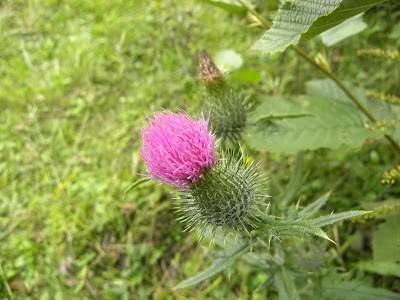 Fred, Maureen and Mike with another barn behind them 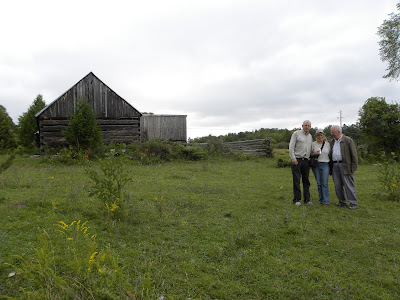 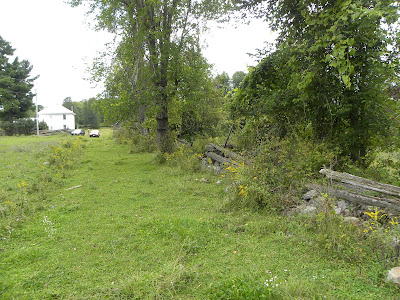 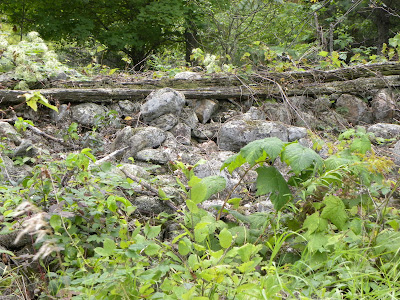 A cedar fence on the property 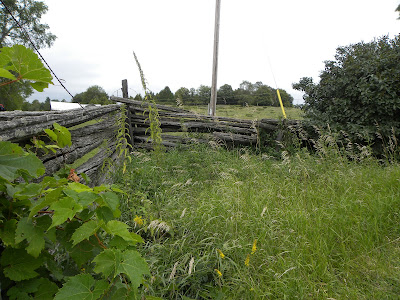 These pictures were taken as we were leaving and were down at the bottom of Maloney Mountain Rd. 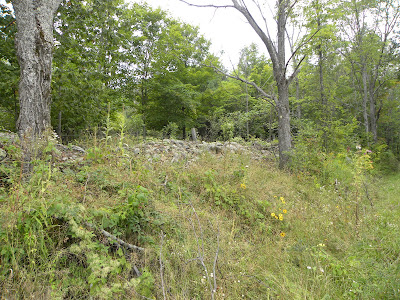 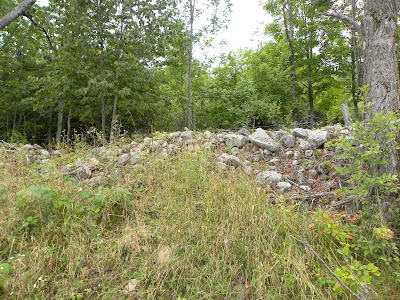 I still have not been able to trace back my roots to Ireland. But I did find a distant cousin, Michael Maloney (descendant of Patrick Maloney: my gg-grandfather John Maloney's brother). He has been in touch with the Clare Heritage Centre, to do some research with the objective of finding the parents of John, Patrick and Michael.

So maybe we will eventually figure out the rest of our story, and who my ggg-grandparents were. God willing.
Posted by Patricia Maloney at 4:55 PM