'Twas the night after Christmas

'Twas the week before Christmas and all through the town
Traffic congested the streets up and down.
Shopping mall parking spots soon became rare
From too many shoppers; that made tempers flare.
Joy to the World at this time is forgot
As you curse at the driver who took the last spot.

The kid now starts screaming he wants this new toy
Your stress levels rise in this season of joy.
But what's one more toy when you're out on a binge
So you pull out your card and you try not to cringe.

Then there's more gifts to buy for Heaven knows who
Is this gift ok? Did they buy for me too?
Still more things to buy and cards to send out
But then panic and debt's what this season's about.

'Twas the night before Christmas, not much more you could do
Thankful there was just one more day to get through.

'Twas the night after Christmas in Heaven above
The Devil was speaking to God about love:
You have to admit that my plan is quite fine
You don't see much love in the world at this time.
They talk about Peace, Love, Hope and Joy
But their actions sure show they don't care for Your Boy.
Christmas is becoming what I want it to be
Causing those humans such anxiety.
Sure there's some fun with the candies and toys
But that is short lived for most girls and boys.
The true things that last as You, God, best know
Are no longer valued on Earth down below.
And talking of Christ has become incorrect
I've made them all feel that it shows disrespect
For others who may not worship your Son,
You must admit with this scheme I have won!
And I laugh at these humans, for my trick they all fall
For your Son is why Christmas existed at all!
If these things continue, my work's almost done
In another few years, they'll have forgotten Your Son!
When that great day comes, Your humans will buy,
Buy more and more, and not even know why!
So their stress will increase and they'll try all the more
To find some of that joy they gave up years before!

God spoke not a word and as calm as could be
He pointed to Earth for the Devil to see.
The boy with the gizmo was bored now, it's true
But the boy had a plan of what he should do.
He went to the house of a neighbourhood boy
Who was poor, had no friends, he was bringing the toy!
And he didn't just go there to give it away
He gave him the toy and he stayed there to play!

And the Devil stopped laughing, thought, Maybe I'm wrong,
Perhaps they were good deep down all along,
Maybe there is some love left, what a fright!
Well, there's always next year. I'm exhausted. Good night!

Barbara Maloney McAdorey is the author of the children's storybook, Icicles to Miracles.
This poem was first published in the December 1999 issue of Our Family magazine.

Picture from original painting by Paula E. Maloney
From the children's storybook, Icicles to Miracles 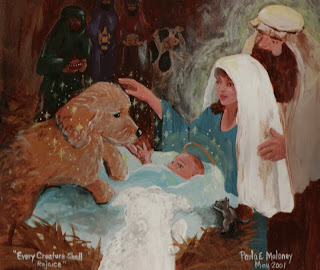 Posted by Patricia Maloney at 11:29 AM No comments:

Praying for the dying

Before our friend Jack died, I spent a lot of time praying for him. I would wake in the middle of the night, and I would pray. During the day whenever I thought of Jack, I prayed. I offered up Masses for him.

I was worried for his soul. Jack was raised a Catholic but was not a practicing Catholic in any way.

About 10 days before he died I asked my spiritual director, a priest, to visit Jack. They had a good talk. Shortly before he died Jack received the Sacrament of the sick.

I prayed at his bedside as he lay dying. I asked my sisters to pray for Jack as well. Sort of like a little prayer committee to get Jack to Heaven.

A funny thing happened to me during this time. I felt good about this praying I was doing. Way more praying than usual. It made me feel at peace, like I was doing something concrete for Jack--when there is so little one can do for another person who is dying of a terminal illness.

After Jack died, I wasn't praying as much. The urgency was gone. And I missed the feeling of peace that had become a part of me as a result of this prayer.

Recently I read The Trial of Faith of Saint Therese of Lisieux. St Therese felt it was her vocation to pray and suffer for souls who had lost their faith. I have also read St. Faustina's diary, another amazing story of a soul close to God. Faustina also prayed for souls.

Putting all this together I knew that I too could pray for souls like these two great saints. I could offer up prayers whenever I thought about it, so that souls who are dying could make it to Heaven. Especially those souls who have nobody to pray for them. Like Jack.

And then it hit me. Jack probably did have others praying for him too. And they would be those other souls, who also felt it was their calling to pray for souls that nobody prayed for. And now Jack can pray for all us here as well.

The Communion of Saints. Awesome.
Posted by Patricia Maloney at 8:17 PM No comments:

What man is looking for

I am always puzzled at the passing of a great person and the large amounts of adulation that ensues.

Like Nelson Mandela in South Africa now, or when Jack Layton, leader of the NDP party in Canada, died two years ago.

I understand that in some cases, the people who died have done great things. We feel sorry that they are no longer with us here on earth.

I could take a day or two or three of hearing about what people perceived as their good works. And yes we need to mourn them. I understand all this.

What I am talking about is not the normal mourning we all must pass through at a death of a loved one. It is this seeming need to put them on par with a deity. To adore them, to worship them, to make them something that they never were and never could be.

All of us on earth are mere humans. With virtues yes, but we are frail and imperfect. It is normal upon a death to ignore those imperfections. We all do it because we need to remember our loved ones for their goodness. And when an average person dies we mourn them in a healthy way. I don't think we do this well when the person is famous.

Often times the public person who dies has values that are far different from our own. Do the public mourners think about this? I don't know.

So many people have given up on God. It is tragic that this is true. God is pure Goodness, and pure Love. He is the one that people are looking for. They just don't seem to know it.
Posted by Patricia Maloney at 7:47 AM No comments:

Father Charles tells us that this special feast day has many lessons for us.

It teaches us the deep truths about our own humanity.

It teaches us that life begins at conception. That God works in us from the very first moments of our life.

It teaches us that sin is not part of our human nature. That we were first created without sin.

Mary was without sin, but she was fully human.

That every gift from God to us also carries a responsibility. These gifts are not only for us, but to be used in the service of others. Mary's Immaculate Conception was not primarily for her. It was for her Son and for all of us. That we should offer everything up back to God, day by day, for His plan for planet Earth.

Lovely words for this beautiful feast of our Blessed Mother.

https://www.youtube.com/watch?v=N3uZ01LbSTg
Posted by Patricia Maloney at 6:29 PM No comments:

Today I saved a life. At least I hope I did. I donated blood.

I have been wanting to do this ever since the one time I did it 41 years ago, but I am quite a chicken poop. You know, the needle in the arm? The blood flowing out? Makes me queasy just thinking about it. But I finally did it.

All the folks at the Canadian Blood Services in Ottawa were very pleasant and put me at ease. I went around with a "1st time blood donor" tag on, and even got a little pin that I proudly put on afterwards.

When my daughter Johanna was born 30 years ago I lost a lot of blood. A ton of blood, in fact. I lost so much blood that I was actually unconscious for some time. At some point I had no recorded blood pressure and my pupils were dilated and fixed. I was attached to a breathing machine.

I do recall somewhere in the blackness that engulfed me, that at some point I was praying really really hard to a very loving God. I knew I was dying.

I know he was loving because I made him a promise, that if he let me live and raise my new daughter, I would do one thing in particular. I never did keep my promise to God. But God kept his end of the bargain (I do believe I have since atoned for that breach of faith. It also made me realize just how imperfect we really are).

When I finally woke up after they pumped me full of other people's blood, I was petrified. But I was alive.

That was an adventure I will never forget, and would have far preferred not to have experienced. But I did. And I lived because a lot of people donated their blood to me. People I don't even know. Maybe even people like me who are scared to death to donate blood.

The lady next to me was giving her 50th pint. Amazing. I wonder how many lives she's saved?

Now I hope to make this a regular thing. It really wasn't that bad. And they give you juice and cookies as a reward for good behaviour. How bad is that?
Posted by Patricia Maloney at 2:07 PM No comments: