Our trip to Ireland (looking for John Maloney, born Ennis 1819)

One of the reasons we went to Ireland in general, and County Clare in particular, was the faint hope I had of tracking down my great great grandfather John Maloney.

On our second trip into Ennis, we returned to the Clare County Library where genealogical records are kept. The first time it was closed which is why we returned.

I asked the librarian if they had any birth or baptismal records from 1819 when John was born. I knew that John was born in Ennis. I was told that there are really no records from before the 1840's, unless the person was part of the gentry or the clergy. I'm pretty certain that John didn't fall into either of those categories. I was apparently out of luck. The librarian suggested I contact the genealogist on staff there in case he had any further suggestions in tracking him down. Once I returned home I did email him a couple of times, but have received no reply as of yet.

Maybe there is someone out there in Internet land, who could point me in a direction to find something out further about my family. One problem in discovering our roots back to Ireland is the numerous spellings of our name:

Molony
and the Gaelic: O Maoldhomhnaigh

And possibly other spellings as well. No wonder I can't find any relatives.

What we do know is the following:
We believe that five brothers came over initially but we only know for certain, the names of these three brothers.

Then I found this information:
"Biddy, Edmund, George, James, John Michael and Patrick Molony all arrived in Canada in 1847."


Is that our Maloney's? This sounded intriguing so I contacted the site to find out how they discovered this information.


These are all the other places I have contacted as well. Will anything turn up? If there are no records for the early 1800's, as seems to be the case so far, probably not. Will keep you posted. 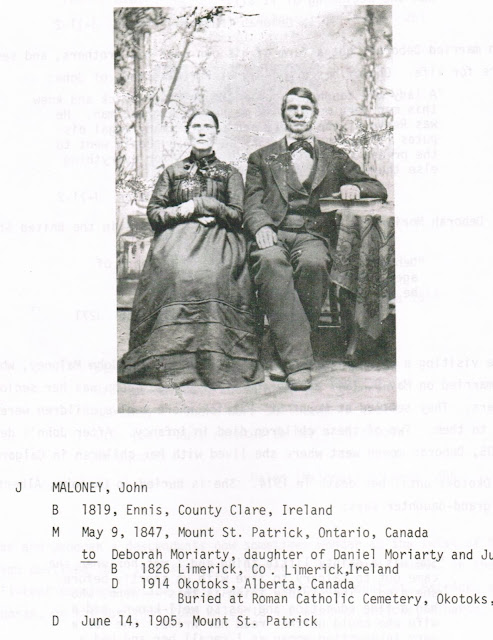