Our journey to Ireland

We recently returned from a month long trip to Ireland. I had been there in 2004 on a bus tour with my sister and her husband--of Ireland, England, Scotland and Wales. The 2004 trip was great, but I knew I needed to return and spend more time in Ireland itself, the country where my ancestors come from. And I wanted Fred to come too.

Neither of us are world travellers, and in fact don't really like travelling that much. We decided we wanted to settle down in one place, and preferably not drive while there--you know the wrong side of the road and all that? So wherever we chose to go to, it had to have all amenities within walking distance of where we stayed. I also wanted to have the choice to be able to cook, and not have to eat out all the time. It also had to be in County Clare where my great-great-grandfather John Maloney was born. I was hoping to find out more about John who was born in Ennis, County Clare.

I started searching for a place to stay, and we ended up deciding on the small village of Lahinch on the West Coast of Ireland. Lahinch is a lovely place known for its surfing, it's beach and its (apparently) fantastic golf course. A lot of Irish families have summer homes there. We were not disappointed with our choice.

We rented a beautiful home from a lovely family. We were about a 10 minute walk from numerous pubs, restaurants, and a small grocery store where we were able to buy all the food we needed. And a fantastic gift shop.

It rained a fair amount, but it never rained for the entire day. It is also very windy in Lahinch, much windier than we are used to. It was apparently cooler than normal for the time of year, with temperatures ranging from about 8 decrees Celsius to about 13 degrees. The weather did not deter us though. We brought our raincoats which we used almost every day, and umbrellas that we never used because of the wind. If we had used the umbrellas, we would have done a Mary Poppins across the bay.

I think this vacation was the best we have ever had. I knew as our time there unfolded that I would have to write about it upon our return. Nothing out of the ordinary happened there really. Other than enjoying every minute; talking to many lovely people and trying to understand what they were saying with that Irish accent that makes one want to weep it's so beautiful; seeing some of the most gorgeous countryside in the world; eating great food; listening to awesome traditional Irish music and singing; watching the set dancing in the barn in Kilfenora; meeting an Irish artist; attending a Gathering concert in Ennis; drinking the best beer in the world; eating lots of potatoes and scones--yum; seeing so many stone fences and sheep that I managed to take nearly 1,500 pictures of it all; visiting all the churches in every town we went to, some of which date back to the 12th century; and knowing when I left that I wanted to return again with my sisters in tow. That's all. Nothing too special really.

I hope to write more about the trip in the coming weeks. A trip that was truly, a gift from God.

Notice the different spellings of Lahinch: Lehinch and An Leacht, its Irish name. Most, if not all signs provide the Irish names as well. 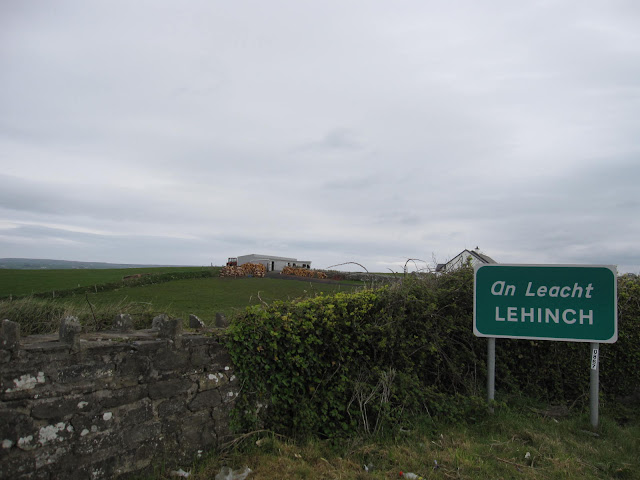 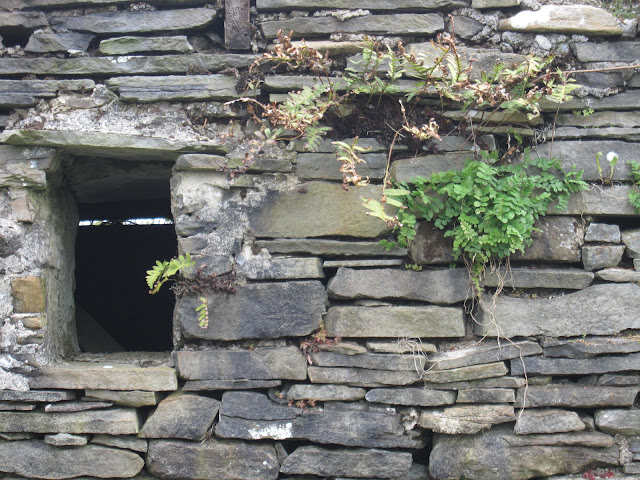 Cows taking shelter behind a stone fence from some pretty ferocious winds. We couldn't see the cows until we made it to that side of the fence. This was taken up on the School Road overlooking the village and bay. 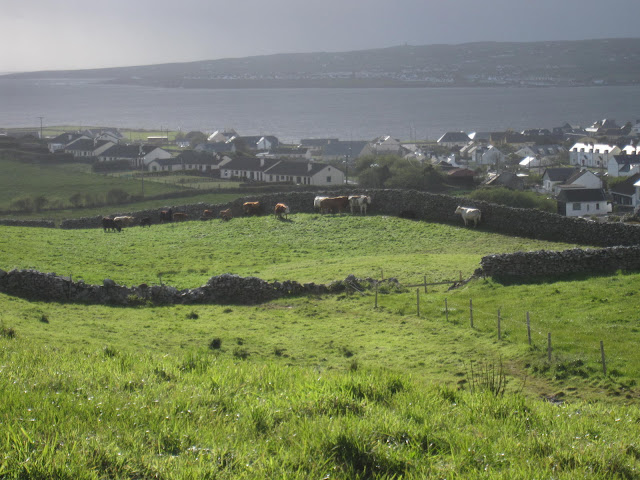 Posted by Patricia Maloney at 3:38 PM