Our trip to Ireland (Music - the old and the new)

On May 16, 2013 we saw the Irish band, Hermitage Green play live at Kenny's Pub in Lahinch.

They were very good and I shot one of their songs with my cell phone. The pub was very full and the patrons were very loud so it was hard to enjoy the music. We stayed a while but eventually left because it was difficult to really appreciate the music properly, with the non-stop chatter and noise of the audience. I guess we are old now.

Once we hit the cold air outside I knew I was in desperate need of the ladies room. You know. To powder my nose? We then went in search of one. When I came out, Fred was looking intently inside at Danny Mac's Pub. There was a trio playing traditional Irish music. So instead of going home like we had planned, in we went to listen.

Yvonne Casey, Kirsten Allstaff and Yvonne Casey were playing. We plunked ourselves down at the table next to them. I was able to tape some of their music, and even made a short video of one of the patrons expressing his obvious admiration of the music. (See video below.)

We then returned the following Thursday to hear them again. Awesome music.

Me in front of Kenny's Pub. Notice the exceptionally attractive yellow boots. 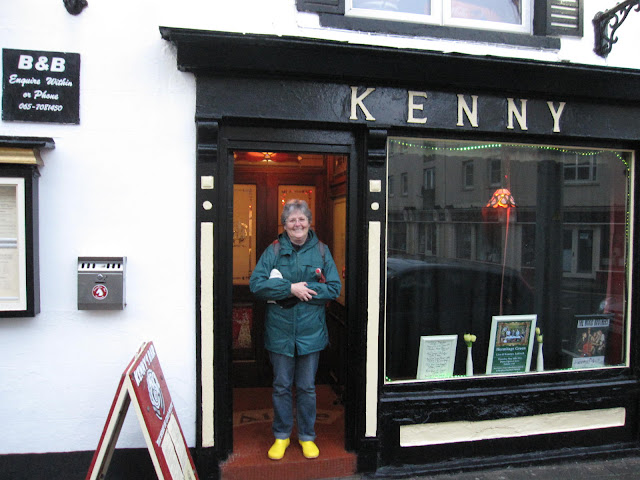 Posted by Patricia Maloney at 8:22 AM